Hagerstown fire stations and the Funkstown Vol. Fire Company were alerted for Box Alarm 4-8-5 for a structure fire in the 600 block of Knightsbridge Drive at 22:49 hours.  The Washington County ECC was receiving numerous reports of a house on fire across from 614 Knightsbridge Drive.  Captain 31 (Daiello) was advised of the multiple calls reporting fire showing.  With this information, Captain 31 immediately requested the Safety Assignment dispatched.

First arriving units found heavy fire showing on side Charlie of a 3 story townhouse at 610 Knightsbridge Drive.  Captain 31 arrived shortly after the units and confirmed they had a working fire and assumed Knightsbridge Command.  First-in units made an aggressive interior and exterior attack on the fire splitting into separate crews to battle the blaze.  As firefighters worked to extinguish the fire on the exterior on side Charlie, interior crews were met with heavy fire conditions in the basement of the house. 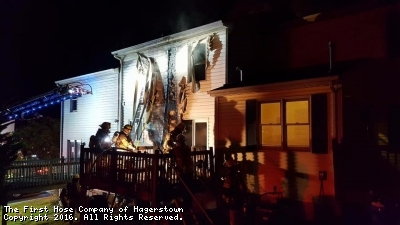 Firefighters battling the late night blaze were able to bring the fire under control within fifteen minutes of their arrival on the scene.  Once knocked down crews began conducting overhaul operations as City Fire Marshals arrived on the scene to begin their investigation into what caused the fire.  Crews from the Hagerstown Fire Department remained on the scene for several hours assisting the City Fire Marshals.  Final crews began clearing the scene the next morning around 02:55 hours.

Units on the scene: