An individual leaving Meritus Medical Center contacted 9-1-1 advising a building was on fire near Yale Drive.  Box Alarm 10-3 was immediately dispatched at 02:50 hrs. bringing multiple departments on the response.  9-1-1 calls continued to pour into the ECC reporting a building fully engulfed in flames.

Chief 10 (Piefer) from Funkstown requested the Safety Assignment dispatched due to the multiple reports to the ECC.  Engine 3 (Independent Juniors) arrived at 11370 Caring Pathway Lane to find a 16,400 square foot structure, still under construction with heavy fire through the roof. 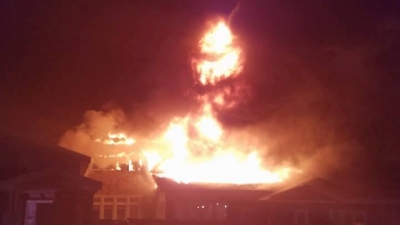 Chief 10 confirmed Engine 3's report, assumed the command and advised that crews would be operating in a defensive mode from the exterior of the structure.  Initial arriving units worked vigorously to conduct an exterior attack using hand lines and wagon pipes as crews worked to establish an adequate water supply.  Once established, command had crews work to place ladder pipes in place using Truck 1 (Pioneers), Quint 27 (Long Meadow) and Tower 26 (Volunteer Fire Co. of Halfway).  As heavy fire continued to blow from the roof of the structure, command requested a Tanker Task Force at 03:24 hrs. and the 2nd Alarm immediately following at 03:27 hrs. 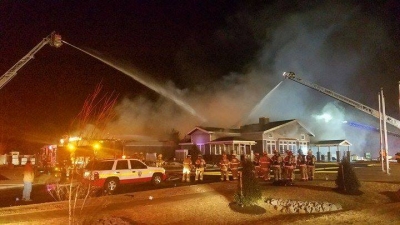 Crews on the scene worked for another two hours conducting extensive overhaul operations.  The Maryland State Fire Marshals office responded to the scene to conduct an investigation into the cause of the fire.  The building was a total loss with damage estimates of $3.5 million dollars.  State Fire Marshals have yet to release a cause and are still actively investigating the cause of this disastrous fire.

Units on the scene: